How to calculate "real" parameters from affine transformation 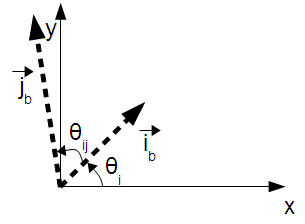 This model contains all of the parameters except for translation. Translation may be added in after the coordinates have been scaled, rotated and sheared. The above illustration contains the physically significant parameters which will be calculated by this method. These are: θi, θij, and the pixel size along the ib and jb basis vectors.

The inputs to this method are the four non-translation (non-offset) parameters of a linear transform. These are shown below:

Although these parameters have "common names" within the GIS community, the names are both lengthy and misleading. Within the context of this page, the coefficients o11, o12, o21, and o22 will be used.

This page is divided into sections. Each section describes the computation of one physically significant parameter.

Pixel size in the i direction

The pixel size is then calculated as follows:

Pixel size in the j direction

The pixel size is then calculated as follows:

The grid is rotated by the angle θi. This is the angle between the x axis of the reference frame and the ib basis vector. The angle θi is considered positive in the clockwise direction, for consistency with compass headings. The calculation of θi is a two-step process: first the magnitude is calculated, then the sign is determined. Both steps involve using the ​dot product to determine the angle between θi and one of the axes of the target coordinate system (either the x axis or the y axis. The equations in this section refer to the angles and vectors defined in the following figure: 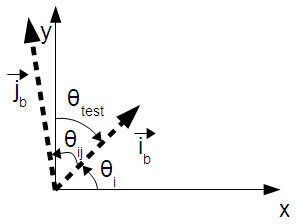 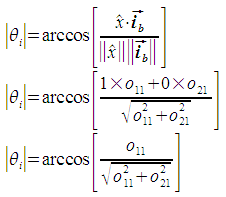 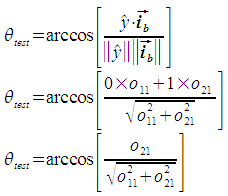 In this section, the method to calculate θij is presented. This is similar to the method for the calculation of θi, but it is accomplished with respect to the rotated reference frame of ib and ibp instead of the x and y axes. The figure which represents this setup is as follows: 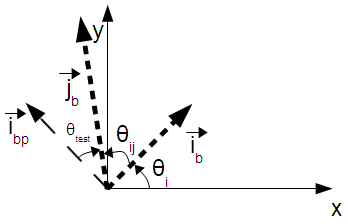 The first step is to calculate the magnitude of θij, the angle between ib and jb.

Next, we need to determine the sign of θij in a manner similar to how the sign for θi was determined. The angle θij always represents the angle from ib to jb, and is positive counterclockwise for consistency with a right-handed coordinate system. To do this, we first need to calculate ibp, which is perpendicular to ib and forms a ​right-hand coordinate system with ib. Observe that ibp is ib after a 90 degree counterclockwise rotation. 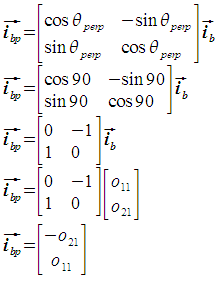 If θij has any value other than +-90 degrees, the basis vectors are not orthogonal and the transformed pixels are diamond shaped. Probably the most common value for θij is -90 degrees, which indicates that the transform "flips" the j axis.

The method presented here performs calculations in the coordinate system used by the geocoordinates. All of the parameters calculated by this method are tied to the same SRID referenced by the transform O. It is assumed that the x and y axes of the geospatial coordinate system are orthogonal.