Geospatial rasters inherently have two coordinate systems associated with them: pixel indices (i,j) and real world coordinates (x,y). For the simple case covered on this page, where a linear transform is sufficient to relate the two coordinate systems, physically significant parameters may be used to define the linear relation. These physically significant parameters control the magnitude and orientation of the basis vectors ib and jb defined in the following figure: 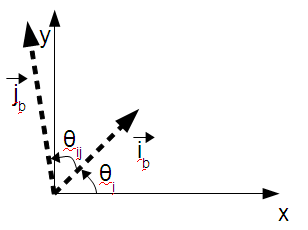 In the above image, the x and y axes represent geocoordinates (e.g., easting and northing in a projected system or longitude and latitude in a geographic system.) The basis vectors ib and jb are the transformed unit vectors i and j, respectively. The magnitude of the basis vectors represent the distance between grid cells in the units of the geocoordinate system. The angle between the x axis and basis vector ib is given by θi. The angle between the two basis vectors is designated by θij. In a "normal" right handed coordinate system, θij is +90 degrees, but the value -90 degrees (indicating that the j axis needs to be flipped) is also very common. Any value other than plus or minus 90 degrees indicates that the linear transform includes shearing parallel to the i axis.

The physically significant inputs which drive the model are:

The level of math required to follow along is advanced high school algebra or introductory college algebra. It should be accessible to anyone with a science, math, or engineering background. Lacking this, the nontechnical introduction to ​matrix multiplication on wikipedia should provide sufficient background.

There are two directions one can rotate in two dimensions: clockwise and counter clockwise. The transformations are different. The counter-clockwise rotation is:

To rotate in the clockwise direction:

Scaling is used to set the size of the raster's grid cells in the x and y direction. The transformation is as follows:

Shearing is visually equivalent to a "slanting" which is parallel to either the x or the y axis. This is a less common operation than rotation and scaling. These are presented as individual operations: one for each axis.

Shearing parallel to the x axis takes the following form.

While shearing parallel to the y axis has this form:

Reflection across the x axis (or "flipping" the y axis) is accomplished with the following transform:

Whenever more than one of the above operations is required, they may be combined using ​matrix multiplication. As an example, all of the above matrices will be combined into one. The result of such a combination is still not an affine transform, however. It is just a 2x2 matrix which has all the individual transformation functions aggregated into it.

We will be calculating a new matrix, O, which is the aggregate of the following individual operations:

We do this by multiplying the 2x2 matrices of the individual operations together, as follows:

We will perform the matrix multiplications on the right hand side one at a time.

The above matrix equation is shorthand for four equations: one equation each for o11, o12, o21 and o22.

Notice that none of the coefficients in the O matrix may be said to represent pure scaling, rotation or shearing. Rather, they all have components of each of these operations factored in. The final matrix equation has some terms which need to be calculated. This will be performed in the next section using the real input parameters. Once these terms have been calculated, they may be plugged into the above equations to arrive at the coefficients which must be stored in the geotransform matrix.

Also notice that it is not necessary to compute this matrix every time one wants to convert between pixel indices and geographic location. The coefficients are computed once for the entire raster, and may be reused for every pixel calculation. You would use this aggregate matrix O exactly as you would use any of the individual matrices:

The linear transform matrix O, calculated in the previous section, contained some terms which need to be calculated from the provided, physically significant inputs. These terms are si, sj, ki and f.

Scaling along i axis

Scaling along the i axis is represented by the si term. We will set it using the magnitude of the ib basis vector. This section will go about proving that this is a valid thing to do.

To simplify things and remove clutter from the equation, note that the final component of the aggregate transform (rotation) does not affect the magnitude of the basis vector. So, the i unit vector projected thru a non-rotating transform is calculated as follows: 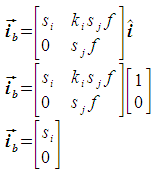 The magnitude of ib is given as follows:

Shearing parallel to i axis

Any value of θij which is not plus or minus 90 degrees indicates that shearing parallel to the i axis is required. This produces diamond shaped (non-rectangular) pixels in the output. In this section, we calculate a value for ki from the provided value for θij. Note that since the rotation of the entire grid does not affect the angle between the two basis vectors (because they are both rotated by the same amount), we solve for ki in the non-rotated system.

The jb basis vector is represented as follows: 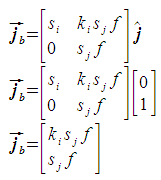 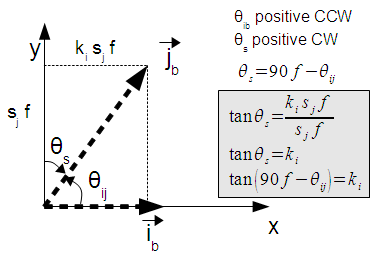 In this diagram, θs represents the shearing angle, which is a ​complementary angle to θij. The provided equation defines θs = 90f - θij in order to have a single equation which is correct whether the j axis is flipped or not.

This equation passes the basic sanity check that ki=0 when θij is plus or minus 90 and f is defined as above. Note that θij = 0 or 180 degrees is an error. This is not just a mathematical artifact. The basis vectors are not allowed to be parallel to each other because then you no longer have a grid.

Scaling along the j axis

Scaling along the j axis is represented by the sj term. We will set it using the magnitude of the jb basis vector and the above defined terms. This will be more complex than the corresponding calculation for the i axis, due to the possible presence of shearing.

The jb basis vector is represented as follows:

The magnitude of jb is then calculated as follows:

Substituting for ki and solving for sj:

The 2x2 matrix O is the upper-left hand corner of the affine transformation, which is the 3x3 matrix, A. The right hand column contains the offsets, or translation, of the raster in the x and y directions. The bottom row is always filled with the numbers 0, 0, 1. The result of this is that there are six parameters to an affine transformation which can actually change, as shown:

It is these six parameters (a11…a23)which are typically stored within a geospatial image file format to record the conversion from pixel index to geolocation. The actual conversion is described as follows:

where E is easting, N is northing, i is pixel column and j is pixel row. The last row of the matrix equation is always ignored, as it boils down to 1=1. It is there to make a square matrix used to calculate the inverse operation.

The six parameters of the affine transform are given the following names in postgis raster:

With the exception of OffsetX and OffsetY, the names are somewhat arbitrary for the general case.