Currently, the "postgis" and "raster" libraries are in parallel, having no dependency relationship between them. Both libraries depend on liblwgeom for common code, but liblwgeom does not contain any postgresql-aware code (e.g., memory context, etc.) There is no place, therefore, for common code which needs to be postgresql aware.

Lack of such a mechanism is blocking #1053 and #1058, which attempt to implement the dependency represented by the dashed line in the following figure: 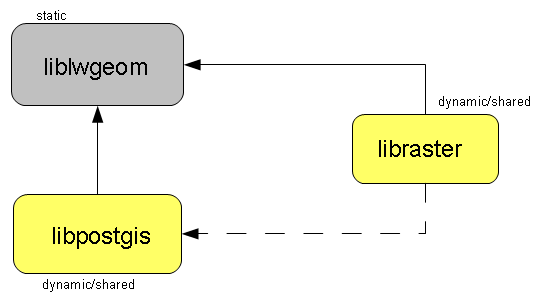 As I see it, there are four candidate solutions:

Could you describe why you need such a dependency? Which functionality do you need from libpostgis?

The immediate need is described at length on #1058, even though it applies more directly to #1053.

In essence, I want access to the cache of projections. The code uses postgresql memory context stuff and queries the spatial_ref_sys table. Hence, it cannot go into liblwgeom, as that is not supposed to be tied to postgresql.

However, once a strategy is figured out, it has much wider applicability than this first application. Raster suddenly has access to all Postgis functionality at the C level.

Tentatively adopting strategy three, above. See the patch on #1053 for the creation of a libcommon static library which can be used by code in both raster and postgis.

Dependencies suggested by option 3 are illustrated by 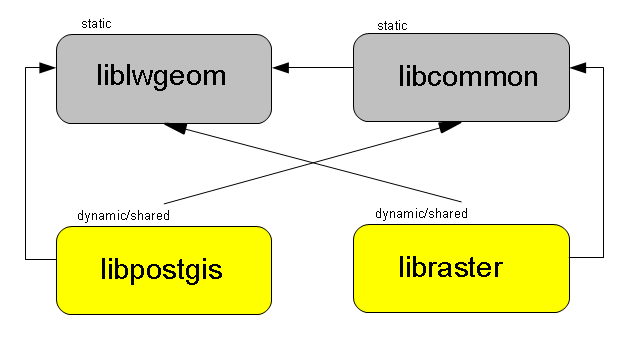 Note liblwgeom is the only library which does not depend on one of the others.

I think we're pretty much settled about libs dependencies for the time being.