-w
Weighted input, do not perform the default scaling of input raster maps

-p
Use progressive bandwidth for mean shift
Spatial bandwidth is increased, range (spectral) bandwidth is decreased in each iteration

Difference threshold between 0 and 1 Threshold = 0 merges only identical segments; threshold = 1 merges all

spatial bandwidth in number of cells

range bandwidth in number of cells

Minimum number of cells in a segment The final step will merge small segments with their best neighbor Options: 1-100000 Default: 1

Maximum number of iterations during the mean shift process

Boolean if overtie the existing raster

run with the user interface mode

Mean shift segmentation is a local homogenization technique that is very useful for damping shading or tonality differences in localized objects. For the algorithm implementation of this case, basically the algorithm replaces each pixel with the mean of the pixels in a range-r neighborhood and whose value is within a distance d. The Mean Shift usually has 3 important parameters: 1) A distance function for measuring distances between pixels. Usually the Euclidean distance, but any other well-defined distance function could be used. The Manhattan Distance is another useful choice sometimes. 2) A radius (spatial bandwidth). All pixels within this radius (measured according the above distance) will be accounted for the calculation. 3) A value difference (range bandwidth). From all pixels inside radius r, we will take only those whose values are within this difference for calculating the mean [1].

Numerous nonparametric clustering methods can be separated into two parts:hierarchical clustering and density estimation. Hierarchical clustering composes either aggregation or division based on some proximate measure. The concept of the density estimation-based nonparametric clustering method is that the feature space can be considered as the experiential probability density function (p.d.f.) of the represented parameter. The mean shift algorithm can be classified as density estimation. It adequately analyzes feature space to cluster them and can provide reliable solutions for many vision tasks. The basics of mean shift are discussed as below [3].

The seeded region growing (SRG) algorithm is one of the simplest region-based segmentation methods. It performs a segmentation of an image with examine the neighboring pixels of a set of points, known as seed points, and determine whether the pixels could be classified to the cluster of seed point or not [2].
Pros:

the number of splitting level is determined by user.

The main goal of watershed segmentation algorithm is to find the “watershed lines” in an image in order to separate the distinct regions. To imagine the pixel values of an image is a 3D topographic chart, where x and y denote the coordinate of plane, and z denotes the pixel value. The algorithm starts to pour water in the topographic chart from the lowest basin to the highest peak.
Pros:

Cons: The segmentation result has over-segmentation problem. The algorithm is time-consuming.

The concept of fast scanning algorithm is to scan from the upper-left corner to lower-right corner of the whole image and determine if we can merge the pixel into an existed clustering. The merged criterion is based on our assigned threshold. If the difference between the pixel value and the average pixel value of the adjacent cluster is smaller than the threshold, then this pixel can be merged into the cluster.
Pros:

Adaptive bandwidth means here that the range bandwidth is adapted for each moving window separately. Range bandwidth is a very important factor which control the segment result. Sometimes fixed range bandwidth in a very large region results in the over-segment or under segment in certain regions. Using adaptive bandwidth, effectively, the bandwidth becomes smaller when there focus cell differs quite a bit from its neighbors, this prevents blending of separate objects that are not clearly separated with regard to band values.

This example uses the panchromatic image inluded in the NC sample dataset. Set up an imagery gourp:

Set the segmentation region, the first testing case will be the full image. 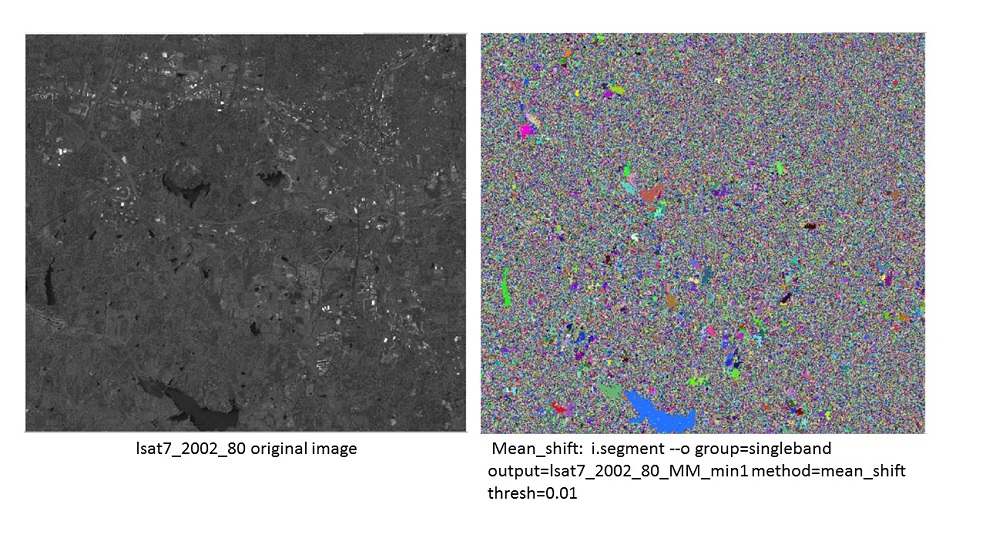 Compare with the original image, most of the features in original image has been segmented out. the noise can be significantly reduced by increasing the threshold of minsize​. 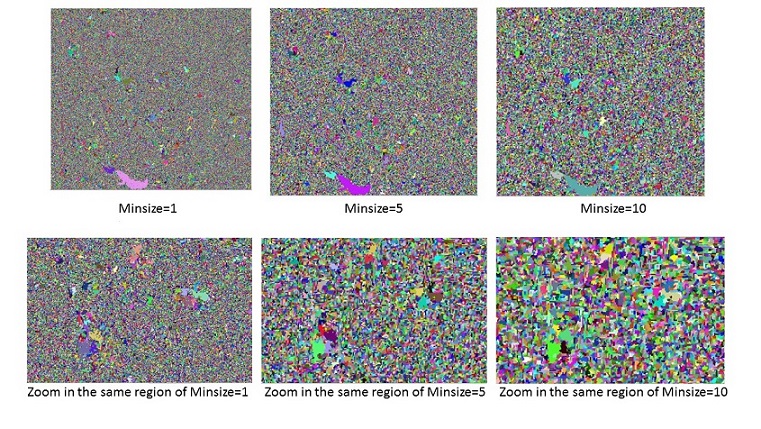 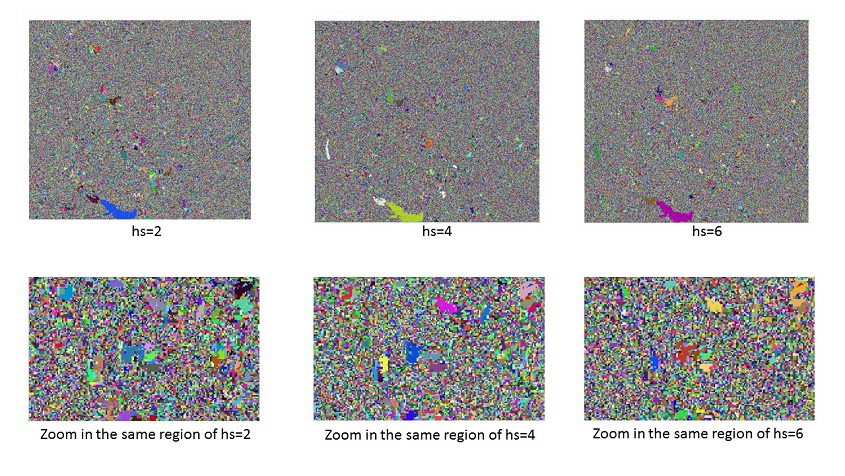 In the zoomed-in image, adaptive bandwidth enhanced the result significantly. Because range bandwidth is the most important parameter for mean shift.

This example uses a group of landsat multi-bands data from GRASS NC sample dataset. Landsat 7 ETM+ band of 5,4,3,2,1 are grouped to be the input of the mean-shift segmentation.

set the segment region to the entire image.

The input arguements are adaptive bandwidth and progressive band width 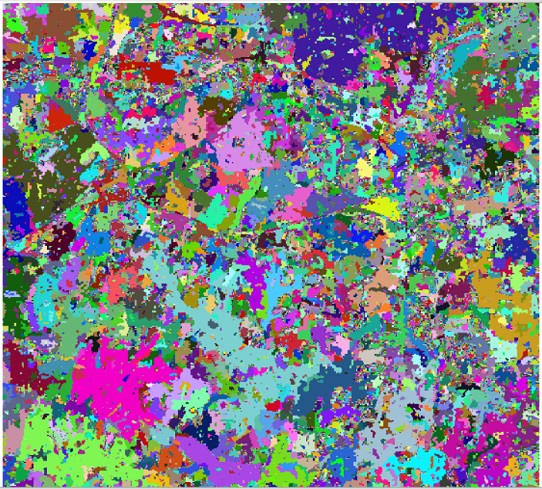