GRASS GIS' capabilities of representing and processing data in 3D raster (voxel) format, are rare among other GIS software packages and open opportunities for new applications, especially in research. In this project I would like to extend the 3D raster handling capabilities by developing a module for computing 3D vector flow lines of a voxel representing trivariate continuous field. This new module, r3.flow, will extend the functionality of module r.flow into the third dimension.

GRASS GIS' capabilities of representing and processing data in 3D raster (voxel) format, are rare among other GIS software packages and open opportunities for new applications, especially in research. In this project I would like to extend the 3D raster handling capabilities by developing a module for computing 3D vector flow lines of a voxel representing trivariate continuous field. This new module, r3.flow, will extend the functionality of module r.flow into the third dimension.

Although GRASS GIS is mainly used for processing 2-dimensional data, it supports 3 dimensions in both vector and raster data representation. Several 3D raster modules are offered by GRASS GIS and are using its 3D raster library; these modules focus mainly on creating and managing voxel data, computing statistics and converting to different formats. However, there is not many modules which would make use of voxel data and which would help in their analysis. In 3D, we miss standard tools used for topographic analysis such as slope, aspect or flow lines. Today, the importance of such tools increases with the availability of new measurement methods producing multidimensional datasets, such as time-series of soil data, water temperature or salinity. Three-dimensional flow lines can help us study the dynamics of elevation time-series in a form of space-time cube voxel representation. The visualization of such flow lines together with isosurfaces and other geographic data can be done directly in GRASS GIS.

New module r3.flow will use the flow tracing algorithm based on vector-grid approach implemented in r.flow module. The input aspect maps, represented by horizontal and vertical aspect 3D raster maps will be computed by v.vol.rst module. Alternatively the input aspect maps can be replaced by computation of gradient direction internally. New module r3.flow should offer similar functionality as r.flow does, including upslope/downslope flow lines computation, flow lines density voxel and specifying number of cells between flow lines.

I discussed the implementation with mentors. Based on that I will use similar approach as implemented in VTK, which computes the flowlines by integrating the vector field. To have a first prototype quickly, I will implement it in Python using PyGRASS to write vector lines and Python scripting library (array.py). I will write the Python code in a way which would make it easy to port to C.

I was looking at the VTK implementation and visualized 3D vector field data in Paraview to better understand the algorithm. Basic implementation would look like this:

I will probably keep the code in sandbox and once it is usable, I will put it in addons

I started to implement the prototype in Python:

The code is in sandbox​. Things to consider:

I have a running prototype producing flowlines, I tested it on artificial data created from the first example in r3.gwflow. Here are some results: 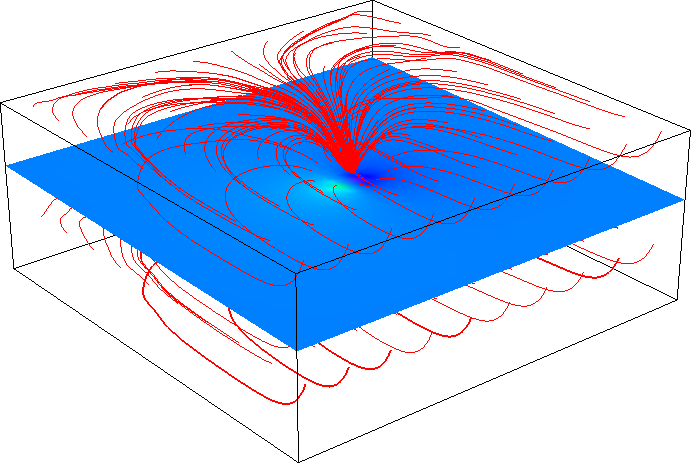 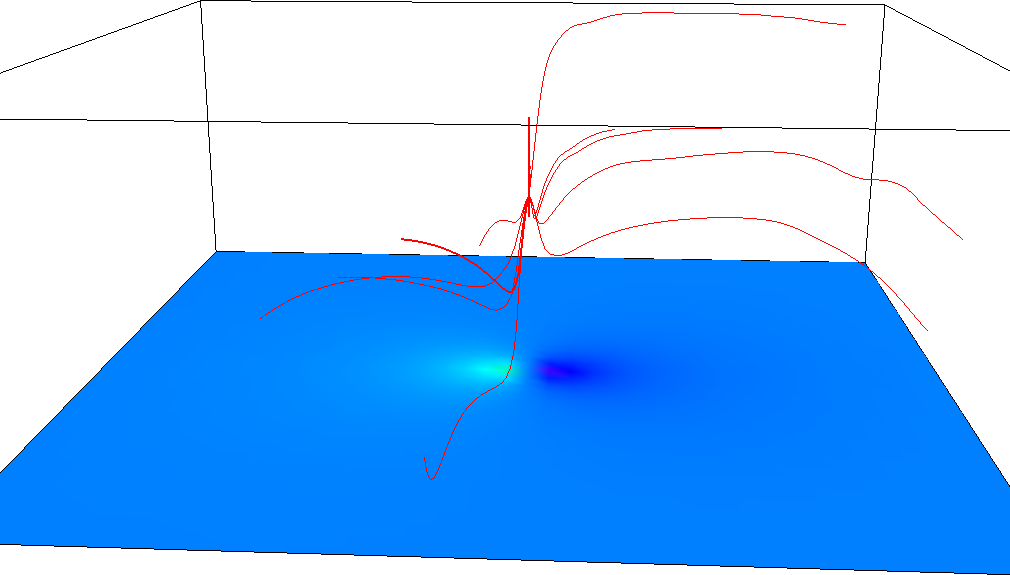 The flowlines can be generated with forward or backward integration (upstream or downstream). The integration step can be defined:

Another parameter is the maximum number of steps which prevents infinite loops I got around the singular point.

I added another input - besides the vector field components, the input can be only one 3D raster (scalar field) and I compute gradient using NumPy's method gradient.

For the next week, I would like to test it on more complicated data (space-time cube data of terrain evolution) and implement a flow accumulation analogue in 3D. I am still not sure how to proceed, I have to either ensure that the step is so small that I will have at least one point of the flowline in the intersected cell or I have to check between each two steps that I didn't skip any cells on the way.

Also I will look at implementation of Runge Kutta method with adaptive step size which might help with the flowlines near a singular point.

I implemented flow accumulation (number of flowlines traversing through voxel) in a naive way where I count that a flowline transects a voxel only when there is at least one point of the flowline in the voxel (cell). This doesn't work very well unless the integration step is very small. So I started to implement a voxel traversal algorithm which should say precisely which voxels are traversed (based on this ​article). I have it working now although I am not sure how to reliably test it. I will incorporate it in the flow accumulation computation. 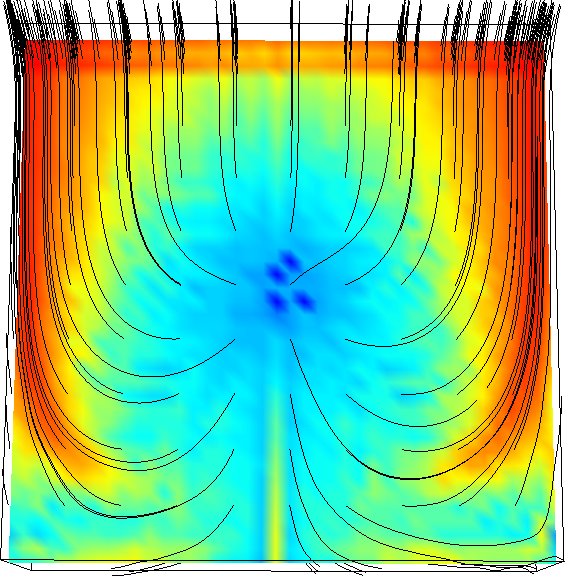 As Soeren pointed out, there will be probably some performance issues when writing to the 3D raster at random positions.

Next, I will try to implement Runge-Kutta with adaptive step size.

I implemented Runge-Kutta with adaptive step size based on the VTK implementation and it produces satisfactory results. It is now used as default integration method.

I started to work on on-the-fly gradient computation. Gradient is computed with central differencing scheme of second order approximation (also on edges). I tested it against numpy implementation, the newest version is required because the older implementations are less precise on the edges. Then I tried to incorporate the computation of the gradient in r3.flow and it still needs some improvements and optimization. Tests show that the resulting flowlines differ slightly from flowlines computed when I use precomputed gradient. So I will look into that.

I fixed the on-the-fly gradient computation and it gives now identical results compared to case where I use precomputed gradient arrays. The gradient array (2x2x2) is not computed every time when the algorithm requests the values, but instead, when it's close enough, it reuses the last gradient values (which happens quite often with reasonably small step size). As profiling showed, it made a significant difference. I wanted to see if computing gradient in larger window would improve it even more, however this required to rewrite this part and the code became too complicated and difficult to maintain because of handling map edges and other things that I decided to leave this approach. Moreover preliminary testing didn't show convincing improvement. I might get to it later. Then, I started rewriting the module in c, some parts which are not likely to be changed. That made me reconsider and reorganize a few things in the main script.

I continued with rewriting the module into C and the current state is in GRASS addons (not sandbox anymore). The functionality of the module includes generating flow lines. Flow accumulation and gradient computation will follow. I tested it against the Python implementation and after fixing some problems (in both implementations) I get the same flow lines (with one type of data). The vertices along the flow lines do not match perfectly, however there is no difference in the flow lines themselves. I keep fixing the Python version, I will still use it for testing.

As expected, the C module is much much faster than the Python version. I also added function documentation.

I didn't have much time this week, so I just wrote more documentation and updated manual page with description and example. I started to write tests, I created a c test module to access the module functions and then I wrote the python test file testing interpolation. However, this broke installing the extension so I removed some changes from svn.

I also added the option to compute flowlines in both directions at once.

The differences in gradient computation from last week are resolved, it was partially caused by Rast3d_location2coord implementation, which was changed and fixed by Soeren.

Next week I would like to try different tile settings to see if there is any difference and then try to implement r3.gradient module based on the gradient function in r3.flow.

I implemented adding attributes to each segment of a flowline. I added column with velocities and values of input 3D raster along the flowline. The result can be visualized by using vector color tables (v.colors) in 2D and 3D (I had to fix the 3D view first). Since this slows down the computation significantly, I left there as default the option not to create table and not to write segments as individual lines. 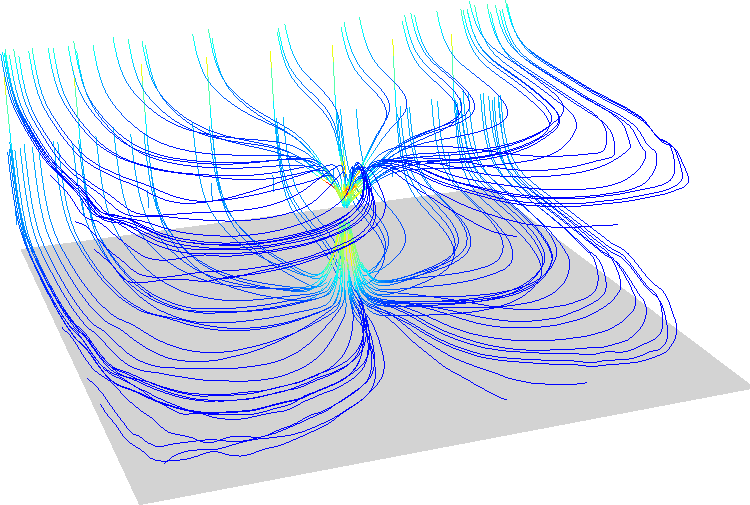 I added gradient function to 3D raster library and than added r3.gradient module to addons. I tested it with and without OpenMP and it seems that OpenMP doesn't really speed up the module, it usually slows it down. So I will probably remove the OpenMP support completely. I also tried different settings of cache but again, I found no significant improvement with other than default settings. Then, I added more tests for r3.flow (and found a bug) and r3.gradient. In the gradient function, I added better handling for NULL values (after consulting with Soeren). Before, NULL values were ignored, now zero is set when one or more of the neighboring voxels are nulls. Null voxels are propagated.

I will move both modules in trunk next week.

I was testing r3.flow on different data and fixed a bug in this module and also in the OGSF library (uninitialized styles). I moved r3.flow and r3.gradient from addons to grass trunk. I disabled OpenMP support for r3.gradient (see week 11). To r3.flow, I would like to add a possibility to specify addditional 3D raster, which would be then sampled by the flowlines (generated from a different 3D raster) and the values stored in the flowlines attribute table. This way, we can visualize the values of this additional 3D raster along flowlines. This should be very simple to implement.