This page contains a change request (RFC) for the MapGuide Open Source project. More MapGuide RFCs can be found on the RFCs page.

This RFC removes support servers from the MapGuide Site Administrator.

Remove the "Add" and "Remove" buttons and the Services column from the "Manage Servers" page: 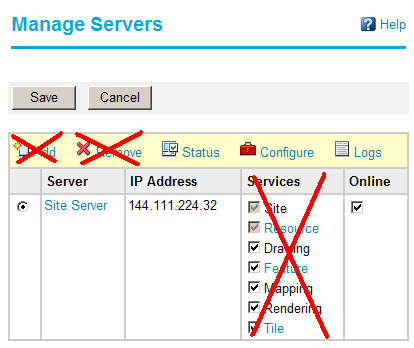 On the "Configure Server" page, remove "Name" and the combo box, and the "Services" check boxes: 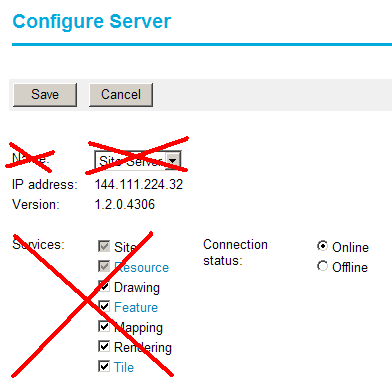 For the "Configure Services" page, remove "Server" and combo box: 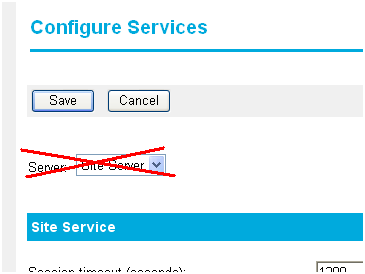 Also remove the enabled flag from the section headers:

Under the "Configure Logs" page, remove "Server" and combo box:

Under the "Manage Logs" page, remove "Server" and combo box: 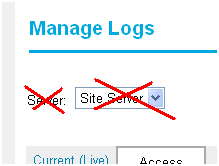 For the configuration files serverconfig.ini and webconfig.ini, a distinction will be made between a "same machine" install where the server and web extensions are installed on the same machine and an installation where they are separated. The "same machine" install is better for disconnected demonstration environments because a routable IP address is not required. The separated install is appropriate for load balanced or secure environments where the server and web extensions reside on multiple or separate machines.

In serverconfig.ini, the MachineIp and IpAddress will be defaulted to 127.0.0.1 for a "same machine" install. For a separated install, the routable IP address of the site server will be specified.

In webconfig.ini, IpAddress will be 127.0.0.1 for a "same machine" install. For a separated install, the routable IP address of the site server will be specified. A comma separated list can also be used to specify multiple site servers.

This RFC removes existing functionality. However, site and support servers were difficult to configure and it is unlikely that this functionality is currently in use.

Validate that the Site Administrator is still functioning correctly.